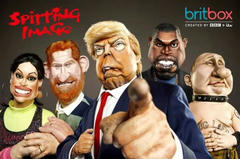 If you can, cast your mind back to your childhood in 1980s Britain. It is Sunday. The day has dragged on for about forty hours already. Sunday dinner has been eaten, washed-up, and the vegetables have been put on to boil so they will be ready for next Sunday. The crushing boredom was nearly enough to make one consider doing one's homework. Nearly.

Fortunately, it is now 10pm and time for the weekend's swan song.

On weekdays, ITV broadcast News at Ten, but 10pm on Sunday is where most of the British really learned about current affairs. Despite being plebs living on a council estate, we were not habitual ITV-watchers, so the channel was changed. The familiar music would hit a crescendo as that gobbet of spittle hit the screen and dribbled down to spell out “Spitting Image”, hailing an extremely entertaining and informative 30 minutes. And afterwards we would retune back to the BBC and ignore ITV for the next 167.5 hours.

The king is dead

The original Spitting Image was a satirical sketch show using latex puppets. The puppets are massively exaggerated caricatures but still basically recognisable. Some were a bit different though: Margaret Thatcher became more and more butch throughout the 80s and was often seen in formal suit and tie, Kenneth Baker was a slimy slug, and John Major was a grey, dull man. And their puppets? Photorealistic.

The credits at the end are long, because a lot of people had to put in a lot of work to make it, and a lot of now-famous big names in comedy appear in the credits. The first few episodes were toe-curlingly bad, but these people honed their craft and it got much better. The credits for a randomly-selected episode list the writers as “Hislop & Newman” of Private Eye fame, “Hunter & Docherty”, “Richard Curtis” (Blackadder, etc), “Guy Jenkins” (this might be a typo of Guy Jenkin who does some cracking stuff with Andy Hamilton), “H J Edgington” (no, me neither), “Steve Punt” (The Now Show, Mock the Week), and “Geoff Atkinson” (again, who?) The script editors are given as “Rob Grant” and “Doug Naylor”, who are perhaps most famous for Red Dwarf. Lots of people who are now big names.

The show gave comic relief to the stress and horrors of 1980s Tory Britain. but when the Great Dictator was finally dethroned in November 1990 and replaced with—er, dull bloke, wossname, really liked a bit of curry—a human cardboard cutout, the series lost its spark and was finally put out of its misery in 1996.

It was a programme of a time that has passed into history: a hated Tory government which had been running the country badly for a decade, a senile US President wanting to bring on the End Times, and a fatal virus working its way through the population, many of whom were treated as social outcasts and blamed for catching the virus through lifestyle choices. Such an era was unprecedented and could never happen again.

Britbox is a streaming service offered by the BBC and ITV to show repeats of their archive programming. Since that lot's already been released many different times on DVD, Blu-Ray, Video 2000, beach towels, and BitTorrent, asking people to pay another £5.99/$6.99/$8.99 per month for the same old stuff is optimistic, especially given that 94% of the world's population are told to bugger off if they have the temerity to attempt to sign up and give them money. Streaming direct-to-TV material is also Netflix's business model, and they attract custom by commissioning their own exclusive programmes. Britbox have thus followed their lead and commissioned a new series of Spitting Image. Because puppet shows are rather expensive to produce, there's more of an American focus so it can be sold in that market, but that's not necessarily a bad thing given how much American politics is influencing the world right now.

Wikipedia and the usual torrents are calling this Spitting Image 2020 (or minor variations thereof) and are restarting the series and episode numbers from 1, so this is clearly being seen as a brand new programme rather than Series 19 after a long hiatus. See also the Doctor Who reboot.

The two rubber stars of the show are, and could only have been, Boris Johnson and Donald Trump, each of them being half the man that Maggie was when (s)he was the star of the original series. Donald's wig is sentient, a joke so old you'll like it, but not a lot. "From Epsilon 5, I mean Durham" we have Dominic Cummings, an alien with a pulsating head and a silver retro-scifi top who thinks babies are delicious. Michael Gove is a really shoddy puppet with visible rods controlling his hands. Priti Awful is a PVC-clad dominatrix off the clock, and an exaggerated Dracula-style collar when in Number 10, the latter joke spelled out when Boris is looking around for somebody to go to Paris and she recoils and hisses out "not me, there's too much garlic." This is not exactly a subtle slow-burner.

Even COVID-19—"Corony" to its friends—gets to be anthropomorphised with its own puppet, which of course a certain blond mop-haired philanderer then seduces. The results nine months later are not pretty.

There was some online consternation about them choosing to do a puppet of Greta Thunberg since it seemed inappropriate to vilify her in the same manner as those actually deserving of it. The original series had similar concerns about their portrayal of the Royal Family, and their portrayal of the Queen as a normal human being worked well. Greta's treatment so far (as of episode three) has been fine.

The programme has a new theme tune which I disliked at first but has grown on me and having re-listened to the old theme, I like this one better. The theme tune plays over the opening, which is the "Britbox Original" ident card, over which a hooded miscreant spray-paints to produce the "Spitting Image" title card. The miscreant turns to camera and is revealed to be the Queen in the first three episodes, and Greta in the fourth. Episodes five onwards have yet to be released, but presumably other puppets will be rotated in, perhaps with a particularly amusing twist in the final episode of the series. At under fifteen seconds long, it doesn't linger: we're here for back-to-back jokes and slapstick, not cheap airtime-filler.

When it comes to airtime-filler, there's that obligatory comedy song at the end which gives your fast-forward button a reason to exist. For better or worse, nothing with the sticking power of Chicken Song has made an appearance. But it surely will, and you'll be hum-ming it for wee-eeks.

The credits list many writers. A stand-out is David X. Cohen for his work on The Simpsons and Futurama. Fans of those programmes may find some characters sound distinctive and familiar, particularly "Corony", and that's because the Futurama actors John DiMaggio and Billy West are here. Those which sound inexplicably slightly Glaswegian? Lewis Macleod. It's a bit of a sausage party but not completely so: I recognise Jess Robinson too. The total is nine male and four female voice actors.

Since this is not "real" television, they don't see the need to avoid George Carlin's seven dirty words. In the first episode, Dominic Raab informs us that "the country's going to shit", David Attenborough complains about "fucking Instagram", and Jacinda Ardern's song about COVID-19 says "we've kicked it in the tits!" (Although "tits" is at worst smutty rather than offensive in British English.) The use of the word "asshole" kind of fades into the background when it's made visual with a puppet of Donald Trump's distended anus slithering along to a phone to send a tweet. This programme might not be entirely suitable for young children.

Britbox refuse to take my euros, so I had to dig out the parrot and eyepatch. This programme on its own is arguably worth the £5.99 (€0.94) per month. I shall make my amends by buying the inevitable Blu-Ray release, and subscribing as soon as they finally realise that the Netherlands is another English-speaking country with a voracious appetite for British television who only speak Dutch to wind-up the tourists.